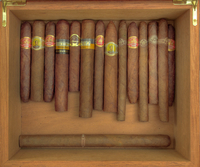 Cigars are believed to have been founded in and around the Latin American cultures around 950AD. There were pockets of cigar smokers around Latin America, but when the Aztec population grew at the beginning of the 14th Century, then tobacco usage also grew. In and around this time, experimentation with other substances grew, and dried fruit, other vegetation and even chocolate was smoked with tobacco to give different flavours.

After Christopher Columbus discovered the Caribbean in 1492, he observed that the natives smoked tobacco in cigars. After persuading one of the locals to show how it is done, and also return to Spain with them, he exchanged goods for tobacco, to take back to Spain.

It was there in Spain the art of pipe making and cigar rolling was perfected, with machines invented and other recipes written to help roll & perfect cigars, and begin mass production of cigars. Soon, Spain had a tradable product on their hands, so they began trading tobacco throughout Europe and the Far East.

Even with this popularity, many of the cigars were made in and around the Caribbean, with certain places getting a reputation for producing fine cigars. Cuba was one such country, and it led the way with its fine crisp cigars.

However, politics were to rear its ugly head, and in 1962, at the height of the Cold War, the Soviet Union came to an agreement with Cuba to set up multiple nuclear bases within the country, in lieu of attacking the United States. As a result, the US President at the time, John F. Kennedy, declared a trade embargo with Cuba. No Cuban goods were allowed to be sold legally to US Citizens, nor were products from Cuba allowed to be on United States soil. This had a crippling effect on the Cuban Cigar industry, as their biggest market disappeared overnight. However, they have since obtained an aura about them, boosting their popularity amongst American Ex-Pat smokers.

Today, Cigar smoking is seen as a more upper class, fashionable alternative to cigarette smoking, and hasn’t seen the drop in fortunes that cigarette smoking has. It’d be interesting to see how tobacco products fare in this century, due to the higher taxes levied on cigars and restrictions on where you can smoke.

Cuba, with all its mystique, is the most famous producer of cigars in the world. The market has been incredibly strong for a while, and is Cuba’s biggest export.

Despite the trade embargo slapped on Cuba by the United States, Cuba’s cigar trade flourished, largely due to the quality & the variety of the cigars. Cuban cigars are usually made in Pinar del Rio and Sancti Spiritus regions of Cuba, as the area has some of the most unique mesoclimates & soil composition, which really helps grow the tobacco. Whilst individual cigar brands exist such as “Montecristo”, “Romeo y Juliet” & “Bolivar”, some of them are worldwide and some are local brands. The “worldwide” brands use similar ingredients as the local brands, however they are produced outside of Cuba (usually Dominican Republic), so that they can be exported to the United States.

Despite the US’s problems with Cuba, it is extremely friendly with its neighbour: the Dominican Republic. Dominican Republic citizens can settle freely in the US with relaxed immigration controls, and that visitors from the United States are able to settle on the island, particularly for retirement.

They have also provided farmers & tobacco growers with machinery & tools to help cultivate their crop. These tools help provide the farmers with the ability to cultivate better tobacco, and more time is handed over to the craftsmanship of the cigars.
The central islands of the Cibao Valley and Santiago have the ideal environment for growing and cultivating tobacco.

Whilst not quite as recognisable as Cuban Cigars, some popular Dominican Republic Cigars include Macanudo, Don Tomas & Tubos.

Honduran Cigars
The one place that benefited from the Cuban revolution was Honduras. In the late 1960′s, early 1970′s, the Cuban tobacconists, exasperated by the state of their nation, upped sticks and left. Many – if not all of the experts, chose Honduras as their newest home. With them, they gave birth to the cigar making industry, certainly for the first time in the modern era.

Cuban tobacconists were drawn to the area by its incredible soil which is rich in nutrients and the climate makes it ideal to grow tobacco.

As such, Honduras cigars, such as Cao Black, Don Ramos & La Invicta, are well known for their strong smell and pleasant aroma.

Nicaraguan Cigars
The Nicaraguan Cigar industry began its life around the same time as its counterpart in Honduras, when the Cuban revolution saw the rise in communism on the island, and the United States severed all diplomatic and official ties with the nation. As a result, the trade on the island was badly hit. The people who were worst hit were the cigar makers, a number of which felt they could reach more customers by moving to Nicaragua than remaining in Cuba. Thus, Nicaragua’s cigar industry was born.

It was also boosted by government. Nicaragua had a rich tobacco producing history, but up until the mid-1960′s there was no cigar production. However the Somoza dictatorship created favourable conditions for the growth of the industry. Furthermore, climates in Nicaragua are excellent for growing Cuban tobacco.

This, along with highly paid Cuban Cigar Makers, made the Nicaraguan Cigar Industry strong.

For more information on any of the above cigars, please visit UKTobacco.com

"Cuban cigars in a humidor" by www.flickr.com/photos/alexbrn, License: creativecommons.org/licenses/by/2.0